Found fish and shrimp living under the thick ice in Antarctica

When drilling a small hole in Antarctica, scientists were surprised to see fish and shrimp swimming in eternal darkness at a depth of 740 m below the ice. 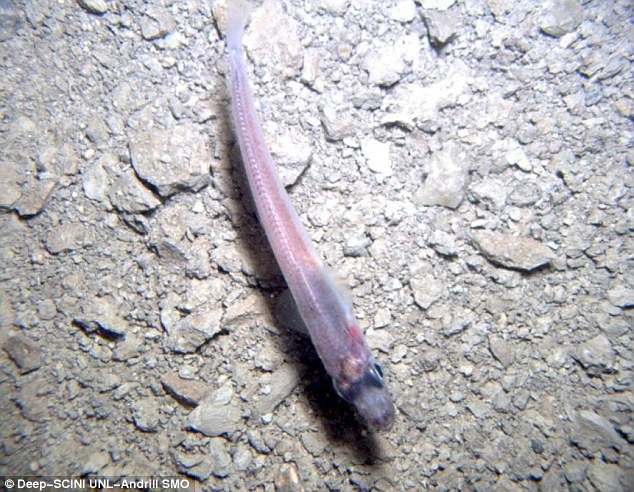 The fish's bodies are translucent so the observer can see their organs. Photo: Ross Powell
Ross Powell, a polar geologist at Northern Illinois University in the US, and his colleagues found the fish strange when they drilled holes in the Ross ice shelf, an area the size of France, to study the Water flows from the west of Antarctica. They swim in the water between the ice and the sea floor. The height of that aquifer is only about 10 m, and the temperature is -2 degrees Celsius, Scientific American reports.

"I'm surprised, because we all think that living animals cannot live in an environment with almost no food, very cold and unfavorable life," Ross said.

Location of Ross shelf (red X) on the map. It is adjacent to the Ross Sea. Graphics: Wikimedia
The team saw between 20 and 30 fish swimming in the water under the ice, so they took the camera down to record them. Their bodies were translucent, brownish-pink in color, so humans could see their organs. Their average body length is about 15 cm.

In addition, the team found two other smaller fish (including one black and one orange), one red shrimp and several invertebrates.

According to experts, it is likely that animals below the thick Antarctic ice eat plankton drifting from the Ross Sea. Bacteria are also another source of their food. Chemical energy from the earth's core helps bacteria and other microorganisms survive in an environment where sunlight cannot reach.

Now Professor Ross and his colleagues are continuing to study fish and shrimp to learn about their species.