Leonardo da Vinci is one of the most famous geniuses in the world, but his personal life is as mysterious as the smile of the Mona Lisa.

Leonardo da Vinci was an Italian painter, sculptor, architect, musician, doctor, engineer, surgeon, inventor and philosopher in the 15th and 16th centuries. he is the Mona Lisa, the Last Supper and the Vitruvius. The Louvre Museum in Paris, where the Mona Lisa is displayed, is hosting events celebrating the 500th anniversary of his death. Leonardo was born in Vinci in 1452, the illegitimate child of 25-year-old notary Ser Piero with the 22-year-old farmer Catarina. In fact, Leonardo does not have a last name. His birth name was Leonardo di ser Piero da Vinci, which means Leonardo - the son of Ser Piero from Vinci. He lived with his father, leading a prosperous life but lacking in his mother's love.

Because he was an illegitimate child, Leonardo did not go to school but attended Latin, geometry and math classes. He entered the nobility when his father allowed him to study Andrea del Verrocchio, the painter who owned one of the most famous studios in Florence.

When Verrocchio was tasked with drawing the picture of the Lord's Baptism, he asked Leonardo and the other students to draw supporting characters and he painted the main character. Leonardo painted a blue-clothed angel holding a cloth in the bottom left corner of the picture. He used oil paints, an uncommon material at the time to give angels vivid colors and soft details.

Feeling Leonardo's angel is more artistic than the rest of the work, Verrocchio decided to give up painting because he was overtaken by his students. 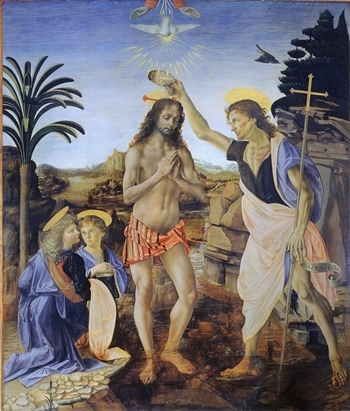 A picture of the Lord's Baptism. Photo: Google Art Project.

Leonardo worked for many powerful people including the Medici Family (starting as a banking family and later having great political influence, having 4 popes as members of this family), Cardinal Cesare Borgia, Duke Milan Ludovico Sforza and French King Francis I.

Many scholars argue that Leonardo is gay, pointing out his long-standing relationship with his pupil Salai (meaning "little devil") - the subject of an artist's voluptuous drawing.

He does not seem to have an intimate relationship with any woman and has expressed hatred for heterosexual sex. In 1476, Leonardo, then 24, and three other young men were accused of having a homosexual relationship with a male sex worker. He was later declared innocent because there was no evidence. Homosexuality was then punished by the death penalty.

However, other scholars say that it is impossible to draw conclusions about Leonardo's sexual orientation from this information. "We know almost nothing about his private life," said Louis Frank, manager of the Louvre.

Leonardo was in charge of organizing parties for the royal family members he served. He scored with decoration, costumes and special effects, ahead of his time. He created a movable mechanical lion model for King Francis I, at the lion's chest is the Fleur-de-lis emblem, the symbol of the French royal family. 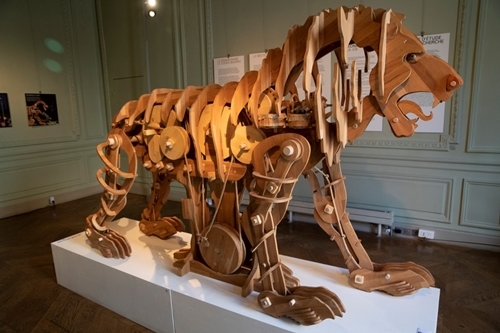 Leonardo has extensive knowledge of anatomy. His curiosity and desire to accurately represent the creature led to him not only dissecting animals but also humans, including at least one pregnant woman who died. He took corpses, often criminals, from medical schools.

Facial expressions are topics that he is passionate about. He conducted meticulous anatomical studies to identify the nerves that make them. This knowledge contributes to the world famous Mona Lisa smile. Her face made people unable to predict whether she was smiling or not.