The dog pushed Greece and Bulgaria into the war

A Greek soldier accidentally crossed the Bulgarian border when chasing a pet dog, causing the two countries to enter a brief war in 1925.

War often breaks out for causes related to land, resources, religion and politics. However, many bloody wars stemmed from silly reasons, typically the military conflict between Greece and Bulgaria over a stray dog ​​in 1925.

Greece and Bulgaria were once part of the Ottoman Empire stretching over territories with many religions, cultures and ethnic groups. The two peoples gained independence in 1832 and 1908, respectively.

Greece and Bulgaria have many reasons to unite and live as peacefully as Eastern Orthodox and as well as members of the Balkan Federation. However, this did not have much effect when the relationship between the two countries became strained in the early 20th century because of competing for ownership of Macedonia and West Thrace. A series of small skirmishes broke out on the border and broke out into a Balkan War in 1913. Bulgaria joined the Germans, Austria and Hungary to attack Serbia during World War I. The war ended with the Allies winning. , Greece enjoyed the spoils of victory under the Treaty of Neuilly-sur-Seine due to the winning party.

Accordingly, Bulgaria had to give up the land of West Thrace, the Kingdom of Serbs, Croats and Slovenes (later to become Yugoslavia). Tensions between Greece and Bulgaria did not improve when World War I ended.

The town of Petrich in southwestern Bulgaria, bordering Greece operates almost as an independent state under IMRO administration. The organization strongly opposed to the policy of reducing tensions with Greece, improving relations with the rest of Europe.

On October 18, 1925, the dog of a Greek soldier stationed at Demir Kapia Pass in Belatsitsa near the border of the two countries suddenly ran towards Bulgaria. Because he was so in love with the pet, this soldier hurriedly chased without knowing he had crossed the border. Bulgarian border guards immediately shot dead Greek soldiers.

Immediately, the Greek border opened fire fiercely towards Bulgaria and the enemy fired back. As the gunfire subsided, a Greek captain and his subordinates raised the white flag into the border area, seeming to call for calm and negotiation. However, the Bulgar side opened fire to kill the captain and wounded the officers running towards Greece.

Greek media at the time ignored the dog's details, accusing some Bulgarian soldiers of unjustly raiding the Greek border post in Belasitsa, killing an officer and a soldier. 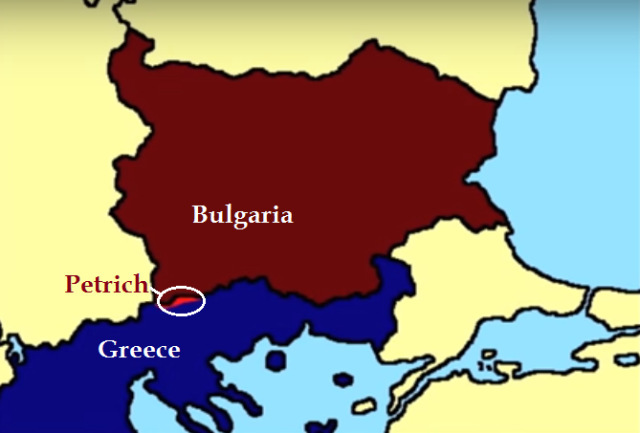 The fate of the dog was not disclosed, but Bulgaria and Greece were then on the brink of war. Bulgaria expressed regret for the incident and said it was all a misunderstanding. They proposed creating a joint commission between the two countries to investigate.

Lt. Gen. Theodoros Pangalos, who recently launched a Greek coup, rejected the proposal and issued an ultimatum to Bulgaria, demanding that they punish the person responsible, issue an official apology and compensate two million. franc for victim's family. Greece also set a deadline of 48 hours for Bulgaria to make the request.

The Bulgarian government refused to carry an ultimatum, prompting Pangalos to send 20,000 troops across the border to capture the town of Petrich and nearby villages on October 22. Bulgaria deployed 10,000 soldiers to deal with the invasion, but Greece still took control of the town and besieged the surrounding area. Bulgaria calls for the Union of Nations, the predecessor organization of the United Nations, to intervene.

The organization ordered a ceasefire, forcing Greece to immediately withdraw its troops and compensate Bulgaria for waging a war. The Greek government must comply with the request and pay the £ 45,000 sum to Bulgaria. The lightning battle killed 20 Bulgarian soldiers and 122 Greek soldiers.