The fairy beauty of the disaster lake

PAKISTAN Under the emerald green water is a tragic story because Lake Attabad was created after a natural disaster.

Pakistan has many beautiful lakes, such as Lake Borith located at an altitude of 2,600 m above sea level, or Passu glacier lake in the middle of the mountains ... But few lakes contain in it both beauty and desolation. like Lake Attabad. In January 2010, a major earthquake struck the Hunza valley, Gilgit Baltistan region, about 760 km from Islamabad.

After the rage of nature caused large landslides in the mountains, the geology of the area quickly changed. The village of Attabad was buried in the ground, about 6,000 people were forced to relocate. More than 20 km of the Karakoram highway, the only road that connects remote lands to the outside, is damaged. The drainage area of ​​the Hunza River was destroyed. The water stream is thus quickly blocked and reaches its maximum depth. The deep green emerald lake of Attabad was created from that destruction. Attabad is constantly expanding. Five months after the disaster, the lake was about 21 km long, nestled along the mountains in the narrow valley of Hunza like a giant, emerald green snake. The water creates a breathtaking beauty for the Gilgit valley, becoming a new attraction for tourists coming to Pakistan. People started to build hotels and motels around the lake, with many different recreational activities such as boating, fishing ...

But for those affected by the disaster, the reality is not entirely picturesque. 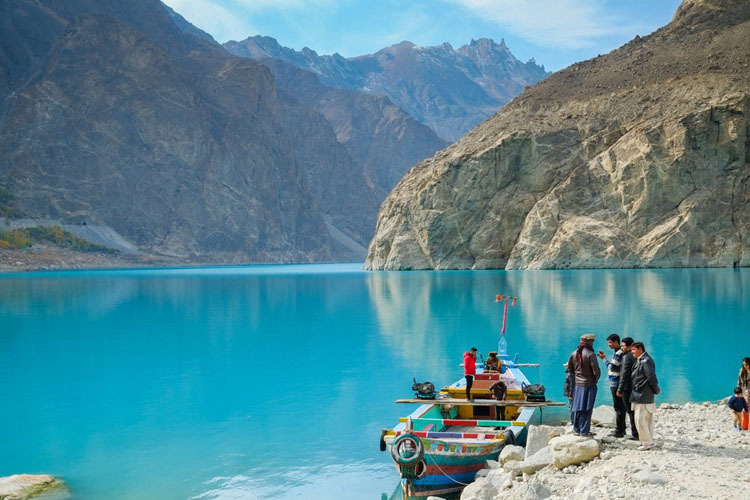 The beauty of the lake attracts many visitors. Photo: Sulo Letta / Shutterstock.

When the highway was flooded, vehicles, passengers and cargo had to cross the water in wooden boats. Although this trip can be an enjoyable experience for tourists, with truckers or locals, it's a real hassle.

Five years later, the Karakoram highway was remodeled and turned along the lake. The life of the people now begins to return to the way it was. 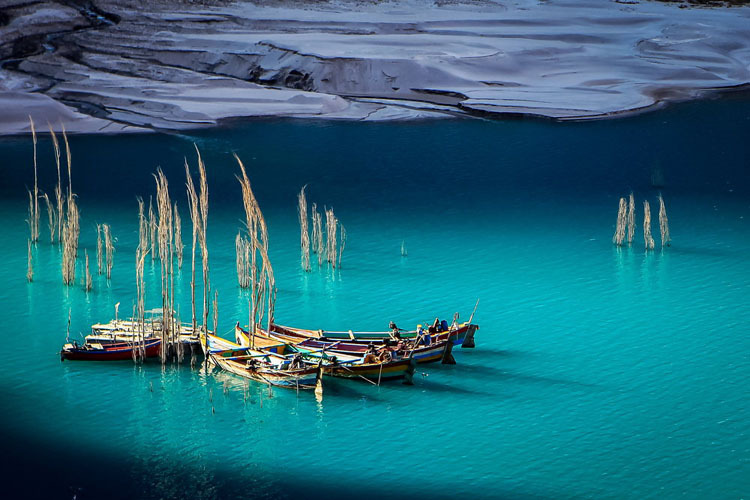 The beauty of the lake is like the scenery only in fairy tales. Photo: Witthawas_Siri / Shutterstock.

Hunza Valley is a paradise for travelers with a peaceful scenery and majestic mountains. Located at an altitude of 2,438 m, it can cool below 0 ° C, with snow in the winter. The tourist season here starts in May and ends in October.

To reach the Hunza valley, tourists can take a flight to Islamabad, the capital of Pakistan. From here, guests can choose a direct flight to Gilgit airport and drive 2-3 hours to the valley. There are many car rental services there. In addition to the above, a 24-hour bus ride is also a way to the valley. Visitors can both enjoy the beautiful scenery on their journey.

The bird that appears in the video is called takahe. This is a flightless bird in New Zealand, with a body length of about 63 cm. They have small weak wings, strong legs and large beak. Currently only more than 400 individual Takahe birds live in the wild. Slow growth and low fertility are a major problem, leaving this rare bird at risk of extinction.

The video is the result of cooperation over the past eight years by Air New Zealand and the New Zealand Department of Conservation. Since 2012, the two organizations have been working together to protect the natural environment of the country. To date, Air New Zealand has supported the movement of more than 3,200 animals in the Red Book to safe shelters, funding trapping insects for 38,000 hectares of land across the country, supporting research projects in the reserve. ocean in New Zealand.

"The story has a simple, gentle expression but conveys an important message: the native birds of New Zealand are in need of all our help. Our safety flight instruction videos have been Having received over 180 million views in the last decade, this is the most effective way for us to talk about the biodiversity crisis in New Zealand, "said Jodi Williams - Brand Manager and Marketing Air New Zealand demand, said.